#metoo, us too and How to respond to bullying, sexual harassment 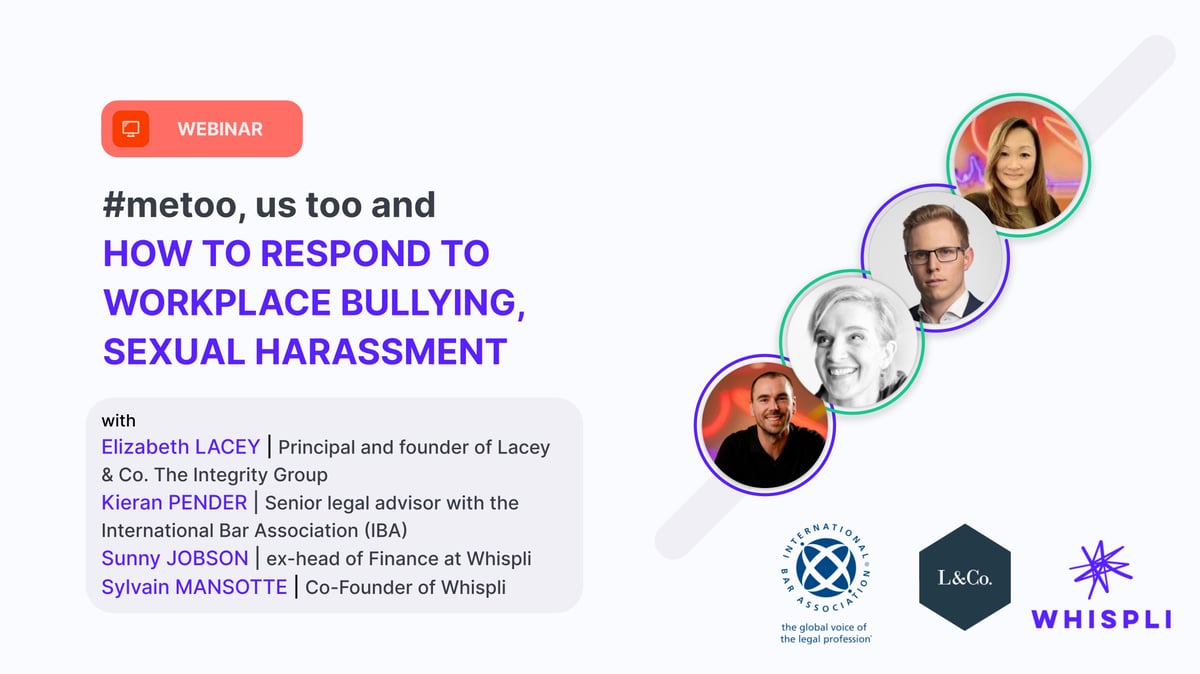 In this Whispli webinar, panelists Elizabeth Lacey, Principal and founder of Lacey & Co.; Kerian Pender, a senior legal advisor with the International Bar Association; and Sunny Jobson, head of finance at Whispli, discussed the prevalence of bullying and inappropriate workplace behavior and solutions for achieving cultural change within the workplace. Moderated by Sylvain Mansotte, founder and CEO of Whispli, the panelists shared their experiences and thoughts on preventative measures organizations can implement now to proactively address these matters.

The people behind the data

“We always have to keep in mind when we talk about these subjects that these are real, human stories behind these numbers,

And these incidents and misbehavior take a real toll. And sometimes we can lose sight of that. With numbers and data, we can become desensitized to that.

Calling it a “system problem,” Pender shared three real stories of workplace harassment from the thousands they received in the survey. In one, a lawyer shared that she’d been groped on two separate occasions by one senior partner, and when nothing was done about it the first time she reported the harassment, she decided not to report it the second time, highlighting the failure in reporting procedures.

Unaddressed misconduct will escalate over time

Sunny Jobson pointed out that while fraud, waste and abuse are prevalent issues in the workplace, bullying and sexual harassment are more far-reaching. And reporting is a problem, according to Lacey. She explained that the system has taught victims that raising allegations could damage the perpetrator’s career when it should be teaching that if the perpetrator continues the behavior it could decimate lives.

Lacey recommended normalizing the conversation about workplace misconduct in the following ways:

As much of the webinar highlighted, reporting fails when nothing is done on the back of the report or if the victim doesn’t feel safe. Mansotte pointed out that Whispli’s software allows victims to anonymously report misconduct until they feel safe coming forward. When it comes to fraud, waste or abuse, reporting can remain anonymous, but if the victim of bullying or harassment wants justice or to receive help, they’ll eventually need to come forward. Sylvain Mansotte explains:

“To be a whistleblower is hard.
It’s like driving a car for the first time.

The more you drive that car the more comfortable you become with it.

He compared this to the “trusted conversations” function of Whispli’s reporting software. No matter the topic, it’s about guiding people to use the same channels they would normally feel comfortable using so they can anonymously start conversations without worrying about where it will escalate within the organization.

Prevention is better than a cure

In closing, panelists agreed that constant feedback is key to creating a positive workplace environment and that starts with tone at the top. Preventing misconduct is an end goal and where workplaces are diverse and safe, productivity and satisfaction are prevalent. The impact of positive behavior by every single person in an organization can be monumental.

Listen to the Webinar to learn more about:

Next Post All-in-One or specialized Whistleblowing solution: which should you choose? - Whispli